Walk: from home, back across the paddock in front of the house, along the road, then up through the beech lined footpath towards the crossroads at North Lodge. Up the hill road towards Forestside on the parallel path in the woods, then steeply up into Nore Down, over the meadow at the top with wild flowers and orchids, back down through the Nore and onto the road home passing the lemon yellow roses where one deep inhale of the perfume is full of reward like a thick slice of sensory cake, buttery fresh and sweet.

Focus for the walk:
Guidance and direction
Reading the signs of nature
Defining the walks in relation to my practice

I take a yes/no card with me to help loosen control, open up to possibilities I wouldn’t think of. 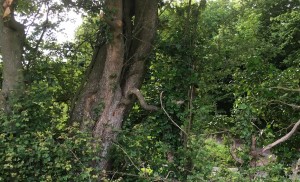 As I approach the style at the end of the field, as if to counter my doubts, a tree points the way.
The footpath is gone and we (Jack the dog and I) follow the road towards the next one.

We pass a metal field gate struck either side by Dogrose. It is the Strawberry Moon, known in the UK sometimes as the Rose Moon. I have been counting the moon walks from the time my daughter left to go traveling in Asia in January. This is the last moon before her return in two weeks, her name is Rosie.

Letting go of attachments of what the walk may give, I realise now as I write with hindsight that my expectations of something miraculous both hindered and supported the experience. The attachment to the anticipation of meaningfulness, of profundity and of high value gave way. As did the footpath. 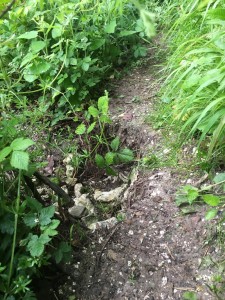 It had fallen in and the chalky stones aged with green creatures lay in the hole with a rim of exposed roots. It looked freshly dug by a burrowing animal, a rabbit, fox or badger. The small chalk stones kicked out looked white. At the time I couldn’t make the connection, but what was previously sure footing has since fallen in.

The word ‘excavate’ came to mind. To bare roots, to call on the earth and let the rocks in my life fall in, to crumble into this walk.

I reset my intention for the walk.
For the best outcome.

Once through the gate my belly starts to ache, a call for tea. I’ve not walked that far, it’s 6am, but I hear the call and sit in the roots of a beech tree (Fagus sylvatica) and drink a mixture of early grey and black tea from a flask. Flasky flavoured tea. The bright green leaves lined by dark reaching branches cover the sky arching over me to the edge of the field in front. I look up in awe. My belly relaxes. The dog sits patiently in front, and alert. I ask the question, what is my work about, and with this my eyes land on a glimmer of Ash leaves visible through the beech. The Ash are calling out. The Ash are being wiped out by disease, Ash dieback, chalara, and by the foresters felling them in answer to the disease. I somehow think the foresters aren’t listening to something. They cut the Ash to curb the spread of disease. Some argue it is better to leave the Ash to fight the disease and learn how to survive. There is some evidence of this in Europe. http://www.confor.org.uk/news/latest-news/a-new-breakthrough-on-ash-dieback/ But the impact is pretty catastrophic and slow. The chainsaw isn’t slow. Between drinks of tea I draw the window from the beech to the ash. 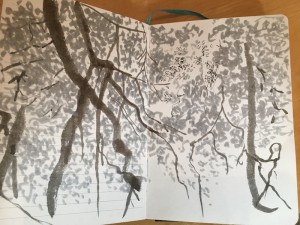 I walk on, find a pool in the roots of another beech and photograph the reflection. Nature mirrors what I project upon it. That is how I read process. I look back to notice I’ve dropped my yes/no card. I’ve taken control, which was not my intention. I pick up the card and ask whether I’ve become distracted too long drawing the beech. Yes. I realise the focus was to read process in nature, and so adjust my intention to that. I keep walking and find more beech. This last year I’ve been drawing gestures of trees – the character of each giving character to the drawn line, and in the drawing of it revealing the character experienced of the tree. How much of what is experienced is projection, and how much is of the subject?
I make some quick studies of the lines of beech. Leanings in and out.
So my practice is personal. It is about the reading of process, of drawing out the lines of gesture and life and asking questions that allow for an alchemy, a transformation, a profundity in life and art.

In Europe the beech signifies ancient wisdom and knowledge.
[On a material level we are told that thin slices of beech wood not only formed the first book (as distinct from scroll), but were also the first prepares surface upon which words were written. This would seem corroborated by etymology, for the Anglo-Saxon for ‘beech’ was bok, which became ‘book’, the modern German Buche is ‘beech’ and Buche is ‘book’, and the Swedish bok is ‘book’ and ‘beech’. Paterson, p.216 Tree Wisdom)

A little further on the path is crossed by deadwood. Hawthorn. Crataegus oxyacantha. The small tree of the rose family. Whilst there are about 1000 species world-wide of hawthorn, there are two in Britain – the English and common Hawthorn. Hawthorn can live up to 400 years, the leaves were eaten by travellers. Strong branches dwindle into fiery threads, all covered in a silvery green lichen. The fire in my belly is out. I’m knocking on deadwood instead of reaching outwards. There is a grief that rises. What am i holding on to? A host of dilemma thoughts pour in. They weigh heavily. What does my art practice give to the world? 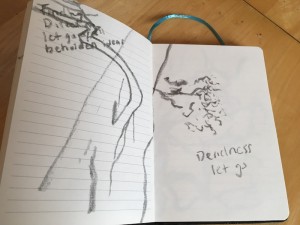 Lost. This is place from which to find direction.
Reading process once more, another beech hints. It has lines that double back and back again. It’s branches grow in and out as if they too held doubt for a moment in their growth, before extending out into the space that was held for just that line.
Life is holding a space for me.
No doubling back.

As if to confirm this, I come across a knot of ivy hanging down in the middle of the pathway like a suspended vase of interwoven maladies that rewrites itself upwards. The ivy is alive, but the Hawthorn branch on which is grew is gone.

I let go of getting.

Let go of the old ways, of old patterns and old relationships. This relationship with my practice is evolving. Let go of being right about it all. Let go of how I think things will unfold. Let go of dilemma clouds. Of trap thoughts. Of being strung up. Of the story of the little girl who was pulled away from nature to suburbia and the heartbreak of feeling lost from nature and lost from my practice, my self, my being.

The walking part of my practice is clearing, connecting and returning. 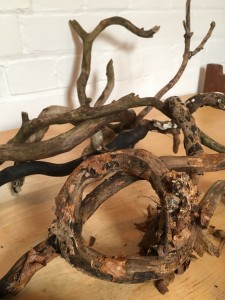 I’m picking up ivy from the forest floor. Ivy that has grown full circle. Much like these walks. I look at the ivy without judgement, at it’s curves, divides, at it’s growth.

Food for the bees, a slow climbing death grip for the trees. It is what it is. Humanity’s growth is like ivy. We can see the topple that growth for growth sake is leading us to, and make different choices.

I find some space under a beech and give thanks by scattering some seeds.

The drawing of the ivy creates a map from which to direct my next walk. Nature is a constant guide. Indigenous cultures around the world have held relationship to it, and some knowledge foretelling this time. How can a drawing matter when faced with such monumental challenges in the world? In the same way that a circular piece of ivy stopped me in my tracks, to notice and ponder. One branch connects to another, mycelium to mycelium, one drawn line to another, one full moon to the next, one artist to three others, one idea to many. It is all connected. We are connected.