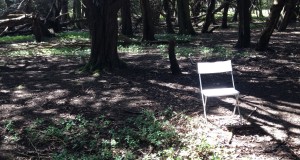 During my residency at Kingley Vale Nature Reserve, West Sussex, England, I spent 20 days May to September 2015 researching How can drawing and drawing approaches affect how I engage with the nature of the forest and the nature of the ‘self’?

The aim of each visit to the forest was to find new ways of accessing, observing and responding to the environment. The intuitive response was encouraged by following through each idea as it came to mind. It began with a drawing of the cracked earth which became a map to get lost with, from getting lost new places, ideas and objects became found. New groves, ideas of the projected self through the clothing of a tree, the tail of a mortar and unexploded fear.

Back at the studio the sense of being ‘lost’ was brought into the process of drawing. It was important to keep being ‘lost’ in making drawings to allow a deeper response to emerge avoiding the critical eye. Digital images taken on walks were projected onto paper and drawn into the page with charcoal were marks that included the recorded image and the remembered image. As I stood in front of the projector breaking the connection to one image to create another.