There is currently an exhibition at the Otter Gallery at the Uni – ‘Grimm Girls: Picturing the ‘Princess’. It’s full of books and illustrations, images that children gazed at whilst someone read to them,  stories full of witches, castles, forests, princesses and heroes. What was missing was art inspired by these tales, the kind of stuff that Jack Zipes showed in his presentation, such as Paula Rego’s Snow White and the step mother 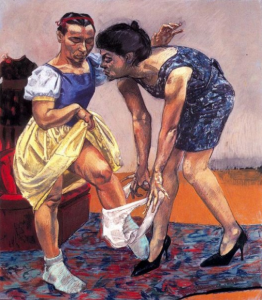 Images where artists subvert stories to reflect new meanings about the lives they know about. But then I suppose if the curator were to include these they might then have to include references to writers reconstructions of the fairy tales. You can find a film with interviews including Philip Pullman, who has recently published a revised edition of Grimms Fairy Tales, he adds emotion and empathy through use of language.

Unfortunately in this exhibition there are Disney references, the plastic white and pink coach from Cinderella looking as out of place as a pumpkin at a ball. I’d forgotten some of the tales and you can read them alongside the illustrations. I searched to find the most familiar illustration, the one that I could pinpoint as the image I knew best, that could zoom me back to my childhood experience, but I couldn’t. They all looked vaguely familiar, some more than others, but I didn’t get that overwhelming rush of recognition from the images, it was the words that did it for me. The rhythm, repetition and awakening memory of these tales, as so many details had lay dormant. It was interpretation, the visual imagery that I’d imagined, that I missed.

I had forgotten the bit about Snow White’s wicked step-mother eating the lungs and liver of a wild boar thinking them to be her step-daughter. She get’s it in the end, having to wear hot iron shoes until she dies a painful death. With so much latency I wondered how these tales could have affected me? A bit obvious really. And what about the repetition of the shoe motif in tales and folklore?

Maria Nikolajeva and Terri Windling also presented at the Symposium

Maria talked about how words and images affect perception and imagination of the reader. That visual stimuli is quicker than verbal – to describe in words Paula Rego’s painting would take more time to read than it would to view the painting. But that words can sometimes describe in more detail, direct attention to that part of the story that a visual reader might miss. She referenced ‘love’ as an example – there being more words to describe love than there are visual motifs. Maria also talked about metaphor, referring to a character from The Frog Prince whose ‘grief was so great he had three iron bands placed around his heart to stop it from bursting’ and how grotesque a literal visual depiction would be where words describe the emotion powerfully and safely, a depiction would change the emphasis to something darker than the intention. Perhaps our focus remains on the picture of grief rather than a metal clad bloody organ, and the image would set off a whole new response. Perhaps that’s why I prefer to listen to the news rather than watch it on TV.

What I find interesting as a visual artist is that in depicting one subject another forms which tells a different story,  rather than illustrates the narrative.

Dina Goldstein’s Snowy from the series Fallen Princess does just that. 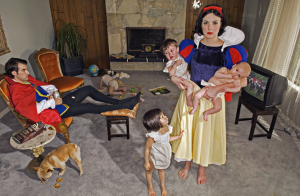 Adults are dressed in the Disney dressing up outfits (not the children), they are not in a Castle, don’t look happy in a presentation of family life, and allude to the gender roles idealised in the fairy tale in modern terms.  So how much did that eager little girl, Tiffany, buy in to this idea of a handsome prince that would rescue her from the bored half-life in a glass coffin, where people said she was pretty, but a bit dead. How much did she want approval from a Kingly father? And is she still waiting for a castle and a happily ever after? Or did she become the rebellious daughter that made the wrong choice and paid for it, isn’t that what happens to naughty characters in the end? Not all of them.

Terri Windling talked about her childhood, how she’d rebelled against family, fleeing the dangers of home to live on the streets in Northeast America, and how she was saved by the enchanted stories in books. She talked about her teenage shame of her love of myths and folklore and fairy tales, and how by embracing her joy of them they had propelled her in to a fulfilling and successful career as an author and editor. Terri also talked about the dangers of Disney stereotypes, and how the better stories full of emotion were like dreams in which we make decisions about our lives. Stories where characters deal with power and isolation, hope and danger, struggle and calamity, trials that children deal with on a daily basis. My son went through a phase in his childhood where he would ask me what I would do if…. what would I do if a murderer stole his sister… what would I do if the house burned down… what would I do if someone came at me with a knife… whilst I was still dreaming of fighting wolves. Both of us working out life strategies, making decisions whether in our conscious or subconscious selves.

Terri recommended not the saccharin tales of Disney but authors like Anne Sexton, Margaret Atwood, Alice Hoffman, Carol Ann Duffy, Liz Lockwood, Gwen Strauss and of course, Sarah Maitland – whose book Gossip From The Forest is beside my bed. She talks about how their stories and poems address our inner lives, our dream lives, they express “cumulative experience” and reinterpret and reinvent fairy tales that allow women to go beyond the stereotype, that “transform our experience of the word, not the world itself”. This connects with my reasoning and sparks excitement, for me it’s the stories we tell ourselves that matter more than the stuff that happens to us as that is what we experience. The stories can also give us the power to bring about change, so I don’t want to read about hapless victims with no control over their own metamorphosis.

Jack Zipes was a real advocate of this and showed many more images of art and he talked about feminist rewriting of fairy tales. He is also not a fan of the new Disney films (Braveheart etc) in which he says female characters gain their power by masculine traits – muscles, fighting, aggression. That all these fairy tale films from Hollywood in 2012 and 2013 were by men and reversed feminism. He also referred to the damage of Disney as a control mechanism by the ruling male minority of the mid twentieth century which delivered powerful messages to young and influential minds, delivered usually by women – mothers reading bedtime stories, librarians, teachers. I haven’t seen them, my children are both over 17 so we avoid them, but with my research I look forward to embracing the enchantment of tales and folklore, and have ordered Terri Windling’s The Wood Wife. As soon as my replacement tripod arrives I will be out in the local woods with my camera to experiment with long exposure and painting with torchlight.

The photographs on my Forest page capture a female form, like the story of the girl who sat in the forest so long that she turned into a tree. Perhaps the process of making art can become a story in itself? I will sleep on that one, isn’t it a strange thing to do to children – read them stories just before they sleep, almost like hypnosis?