BLOG: THE ART OF ENQUIRY IN NATURE
revealing and unfolding
9th March 2019 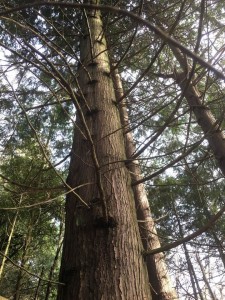 Following international women’s day, we marched the first steep climb and we all felt feisty. The wind was high, 50mph, thrusting the leafless March trees into one another with clangs and squeaks. Some participants didn’t want to walk at the fast pace, didn’t want to follow the exercise, wanted to hold on to serenity and peacefulness. Others followed the pace, spoke their unheard words into the wind to be carried away. Some were silent, lips held shut.

At the top of the slope we gathered and each shared snippets of issues and ideas from the first exercise.

There was a tenseness in the group so we carried on walking, letting the pace naturally pierce this awkward silence like a taught drum. As the pathway opened out into a field I invited one participant to choose a creative exercise card. ‘Teabreak’. We clearly needed to talk but the open space was terrifically windy so we headed to the end of the field where the woodland held some shelter for us. About half-way across, the tension was broken when one woman began to explain her frustration. For her to own it was to pierce the drum for all and conversation became easy for the group. We thanked this woman. Her truth and her voice spoke of the frustration for the group. 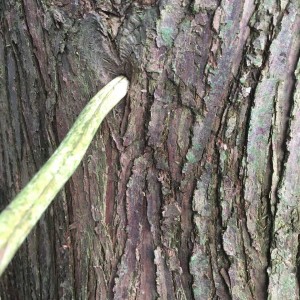 The common thread was finding the space to speak, we then realised we were all in different ways also needing to create a space in which to work with materials, to put our voice into something creative. To do the thing we love. To explain the frustration of not having the right space to work – it’s like asking a chef to prepare a five course meal in a kitchen without a reliable cooker or a fridge in which to store prepared ingredients.

All winter i’ve been frustrated by lack of space as my studio is too cold and dark to work in all year. I generally take over the dining room in the winter, returning to the lean-to conservatory during the summer. But I now realise that the dining room does not work as a studio.  In that space I cannot put ingredient pieces on walls, see the work in progress, and I’ve been inhibited by pale neat carpet, it’s ridiculous. Charcoal dust and paint don’t mix well with it. I hadn’t realised the tension this space has brought to my practice.

The next exercise was using the sense of smell and drawing.
We draw not to make a picture, but to learn to observe.
We draw to give more attention to that which is in front of us, but also inside of us.
My eyes wander the up and down of a tree’s trunk, finding every knot and twist.
My eyes follow the curve of thin branches like elongated ballerina arms to the fine finger tips.
Behind this tree stands a parent tree, a darker, thicker, older tree supporting from behind, and into my mind comes the word ‘ancestor’.
Others in the group have drawn themes to do with family.
A family coppice of trees or roots and the conversation wanders into influences of ancestry, the strength from family, and the closeness that those bonds bring today.
We each recognise our gratitude to our families, and the sense of rootedness that those bonds bring.

Recent mixed media paintings have been exploring rootedness, being and becoming. There is a sweet story of the droplet and the ocean. The droplet being terrified of losing itself by taking it’s next step, falling from the branch into the ocean. Afraid of losing it’s identity, it’s importance, it’s perfect symmetry, as if joining the ocean it would die. But when it finally let go, there was a loud cry ‘I am the ocean!’.

Exercise: writing from the point of view of the subject
This was the start of new poem for me, new poems and stories for others, which will continue to come into being after the enquiry. 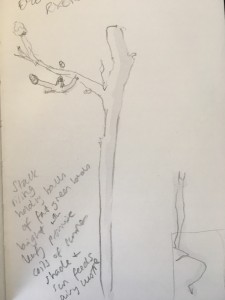 I draw a young sapling – it’s top cut with a small branch folding outwards ending in bright and full green leaf buds. The underneath looks like a diver swimming through the air. What is unusual is that one of the buds is becoming leaf, I draw the layers of leaf and and am amazed at the size of them on this small branch. This sapling is full of becoming. This is how I feel about my work, all of my work and all the different jobs I do. Like swimming in the air full of trust.

As we walk back to the start, we commit to the truth, to the allowing of being and allowing of becoming, even though we may not know what that will be.